Apple and pear breeding in Breinton

Traditional apple orchards have been part of the landscape of Herefordshire for centuries with notable expansion in the 1820s and 1830s. The locations of most of the old orchards of Breinton have been plotted on a map by the Peoples’ Trust for Endangered Species. 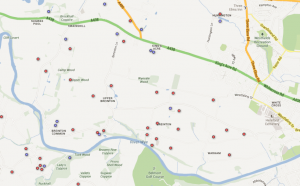 Map of orchard locations in Breinton by the Peoples’ Trust for Endangered Species. Red dots are verified and documented locations, while blue dots are locations still being checked out

Around 1850, members of Herefordshire’s Woolhope Field Naturalist’s Club (some living in or near Breinton) began to see the need to conserve old varieties and promote new ones. They distributed grafts of 92 different apple varieties and successfully revived old valued cider apples such as the Foxwhelph and Skyme’s Kernel. They also visited Rouen in France in 1884 and selected Normandy apple varieties for introduction into Herefordshire. These include Medaille d’Or and Michelin which are still grown today. 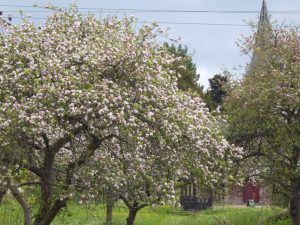 Modern, more commercial orchards also feature alongside the traditional orchards in Breinton today. Breinton Manor Fruit Farm has a shop to sell their own and other local produce, from harvest time to Easter, every year.

The perry pear variety Holmer was developed and distributed by Mr Thomas Andrew Knight. Mr Knight, born at Wormsley Grange (a few miles NW of Breinton) in 1759 experimented with selective breeding and has been called the father of scientific pomology (apple-growing). His Treatise on the Culture of the Apple and Pear appeared in 1797, and in 1811 he published the illustrated Pomona Herefordiensis. His ideas were later developed further by Messrs. Bulmer (later H.P. known as Bulmer & C0. Ltd.) at Kings Acre Nurseries, Breinton.

Members of Herefordshire’s Woolhope Field Naturalist’s Club local to Breinton, including Dr. Henry Graves Bull, Dr. Robert Hogg, and the Rev. C.P. Bulmer, were keen to keep a record of local apples and pears and decided to prepare a definitive “Herefordshire Pomona”. It was issued in parts between 1878 and 1884, with over 400 hand-coloured lithographs provided by Alice Blanche Ellis and Henry Bull’s daughter, Edith Elizabeth Bull. A less expensive, more practical version, The Apple and Pear as Vintage Fruits, (by R. Hogg, G.H.E Pyser and H.G. Bull) was published in 1886.

Apples for cooking and eating

In Breinton, Cranston & Mayos Nurseries, later known as Kings Acre Nurseries and once prominent along Kings Acre Road, have played a major part in the development of commercial apples and pears, – for cider and perry as well as for eating.

There was a decline in cider making in the 1890s, but then Messrs. Bulmer developed new varieties of cider apple, and new techniques for orchard design and management. Bulmer’s was started by H.P. Bulmer (Percy) of Credenhill, and his brother Edward (Fred) in 1887. Percy Bulmer had a weak constitution, but his mother suggested that any enterprise focussed on food or drink should be profitable, and never go out of fashion. The first factory in Maylords Street, Hereford, moved to Ryelands Street in the second year, where the Cider Museum is now, before becoming established in Plough Lane in the 1950s, (by now as H.P. Bulmer & Co. Ltd.). A Royal warrant was granted to the company in 1911.

The Woolhope Club Transactions of the 1890s recorded progress in cider orchard development. Percy and Fred Bulmer planted 70 acres young fruit trees at The Whettons and Broxwood Farms, near Lyonshall, and trialled standard trees at The Whettons for 20 years. In the 1920s they had about 25 apple varieties to sell on to local farmers. Trees were sold along with stakes and guards to stop browsing by cows. Pips were planted and the most vigorous seedlings were taken to be rootstocks. When Kings Acre Nurseries in Breinton came up for sale they bought most but not all of it, and trees were moved from Broxwood. Standards and the first bush trees, that were easier to harvest, were developed. Standard trees needed to be shaken to harvest and had animals grazing underneath. In the orchards the distances between trees were standardised to form 35ft triangles. Trees typically last for 80-100 years in one place.

Various orchards were planted locally, but there was no more fresh land at Kings Acre so it was sold in 1980 and a new experimental farm, Field Farm, was bought at Hampton Bishop. The apple debris from the cider mills was spread under the trees, and pips germinated. Some grew more successfully and were propagated. They started to find that some trees were more vigorous and used them as stem builders, to put on rootstocks and also graft on buds on the head. 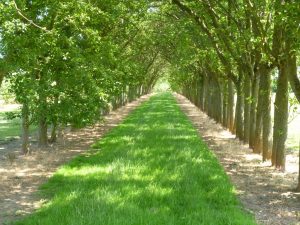 At Upper Hill Farm a new orchard of 100 trees has been planted, April 2014. This is a collection of old cider apple varieties, some from the local Adams Hill orchard and some from elsewhere, all planted in traditional triangle formation. At the time of planting they were 5-6 years old.

By the 1920s Kings Acre Nurseries of Breinton were famous for all types of horticulture, not just apples and pears, and many aspiring nursery men trained there.

The story continued with Wyevale Nurseries, established in 1932 on Kings Acre Road, that grew to become a household name. It started with a 5 acre rose field owned by Harry Williamson, who went on to pioneer the innovation of container-grown plants that could be transported and stored more successfully than bare rootstocks. Roses were grown in reject tins from a nearby jam factory at Whitecross.