There are not many parishes bordering a city that have changed so little in the last 1000 years. In Breinton, one reason for that is the high quality of the soils for agriculture and horticulture. Therefore relatively few new buildings have been built on the valuable land. The name Breinton appears to be a modernised form of the word Bruntone, meaning a village near a flowing stream. 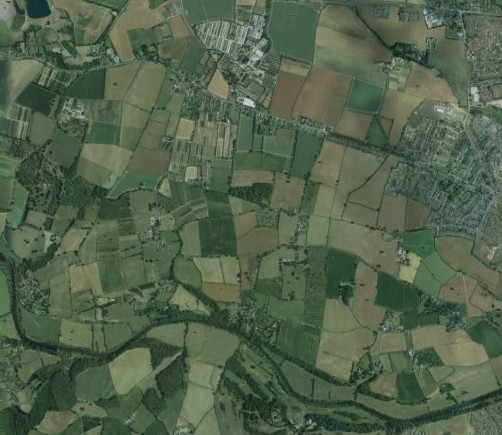 The Domesday Survey of 1086 does not mention Breinton, only the hamlet of Warham (dwelling by the water) as being a possession of the Canons of Hereford Cathedral comprising 2 ½ hides which pay tax, 8 villagers with ploughs, – value 30 shillings. One hide equals 120 acres, so Warham (as described by Muriel Tonkin) would have been about 300 acres with 8 farms, not all of the same size.

The Cassey Directory of Herefordshire for 1858 tells us:

“Breinton, consisting of Upper and Lower, is a township, parish, and straggling village, situated 3 miles west-south-west from Hereford railway station, and is in the Hundred of Grimsworth, and Hereford Union, archdeaconry, deanery, and bishopric. The church, dedicated to St. Michael, is pleasantly situated on an eminence bordering on the river Wye, which bounds the parish on the south, and consists of a nave and chancel, with a square tower at the west end containing two bells. The living is a perpetual curacy, worth £109 yearly, and in the patronage of the Bishop of Hereford; the Rev. Edmund Du Buisson, M.A. is the incumbent. The chief landed proprietors of this parish are John Edwin Jones, Esq.; John Cranston, Esq. of King’s Acre; Edward Lewis, Esq.; John Davies, Esq.; Daniel Pearce, Esq.; and Edmund Russell, Esq., of the Showers, Kingsland. Here is a chapel and school endowed by Lady Southampton, the latter of which is applied to the education of 42 children, and is conducted by Mr. James Pugh. At Warham is also a Church of England school for boys and girls, established January 22, 1855. This is partly within the limits of the city of Hereford. There are charities of about £9 yearly value. The population, in 1851, was 366, with 1,639 acres. The crops are wheat, beans, turnips, &c., with pears and apples.”

This text was also summarised for the 1868 National Gazetteer. In addition the Littlebury’s Directory and Gazetteer of Herefordshire (1876-7) listed the main landowners of the day, and highlighted the extensive Kings Acre Nurseries belonging to Messrs. Cranston and Mayos, declaring that their roses were among the best in the country. It described the recently rebuilt church, under the superintendence of F.R. Kempson, and noted that the parish registers began in 1625. The Directory also tells us that adjoining Kings Acre Nurseries the former Coach and Horses Inn had been turned into a reading room, particularly for the use of workers employed by Cranston & Mayos.

Beyond the lychgate to St Michael’s Church in Lower Breinton (SO 4726 3948) there is the National Trust property of Breinton Springs. Here a roughly circular mound or tump with part of a moat can be seen. Excavations showed walls and a stone gateway. This Norman ringwork is oval in plan with axes of 34 and 20m, and it rises from 0.2m to 1.5m above the surrounding sloping ground. The perimeter bank with an entrance on the north, rises 0.4m above the interior, and an external ditch 10m wide remains on the east and west sides. The earthwork was excavated in 1922 and also between 1959 and 1962 when part of a domestic building with a cellar was identified. It was in use around 1150 AD, possibly as a grange when it is known the Dean and Chapter of Hereford Cathedral held land here. However, it was probably abandoned in the 13th century and only used for a stock enclosure after that time. Read more about the-moated-mound. Recent excavations (2018) at nearby Breinton House suggest that the origin of the moated mound may be earlier than expected. 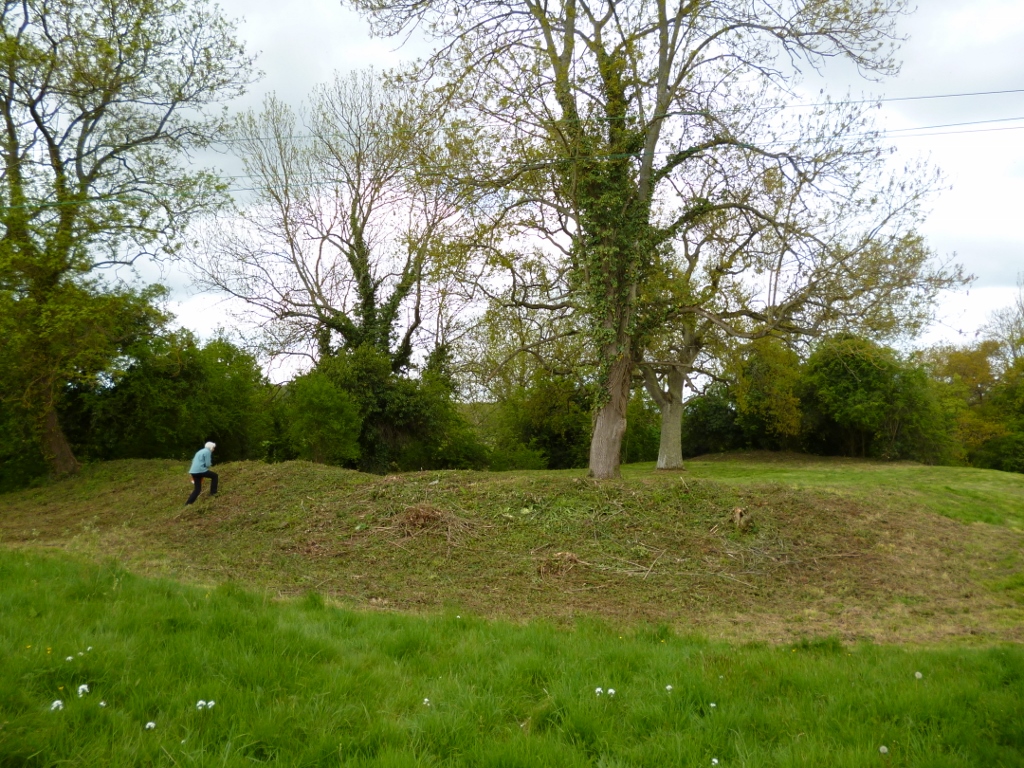 The mound with moat by St Michael’s church (A. Geeson)

The ground in the orchard to the north of the mound is undulating. Horizontal platforms may represent a former vicarage. Coins and a spindle whorl have been found. 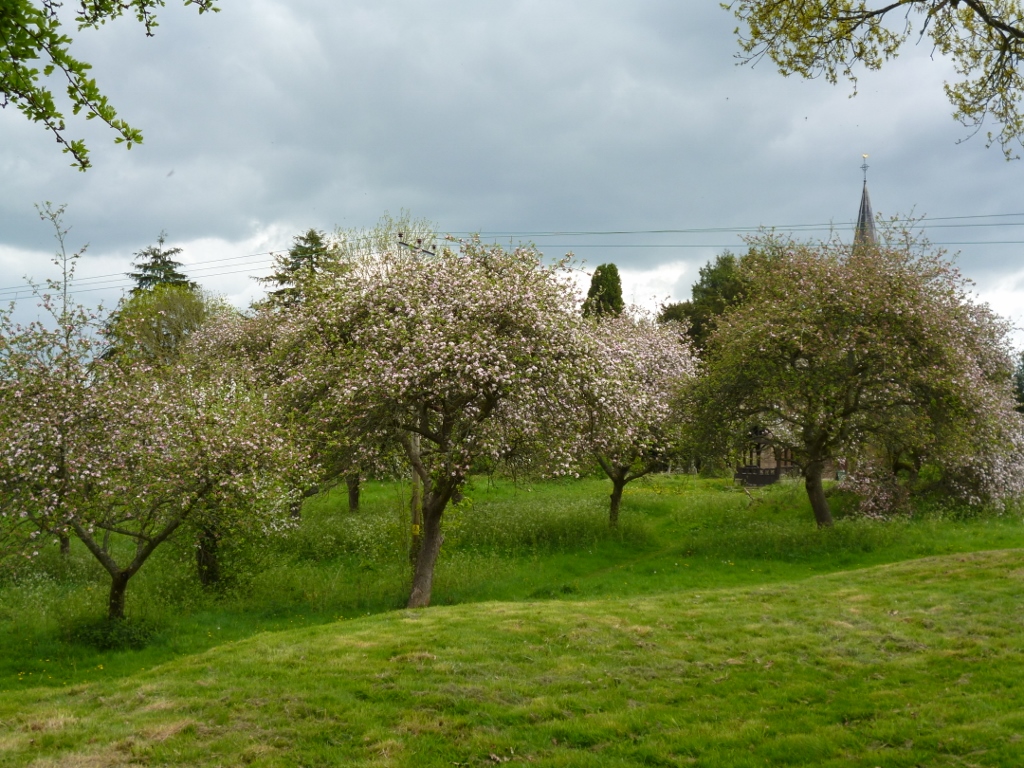 Immediately to the west a track leads down the steep slope in a cutting to the River Wye at Breinton Springs. This is likely to have been a drover’s way, taking livestock through a ford across the river. Another former drove road, leading west out of Hereford, followed a route from Westfaling Street, along the top of the ridge and along Green Lane towards Sugwas Court just beyond the boundary of Breinton parish. This was formerly a rural residence of the Bishops of Hereford. The Green Lane, with clearly defined ditches and banks on each side in some places, and a large pond for watering livestock on their journeys can still be seen and followed today.

Close to the river there are meadows that still show evidence of the channels that were once used to irrigate them and provide lush pasture for livestock.

On a hill to the NW of Breinton Manor Farm, Camp Field is marked on maps from 1831, just outside Breinton Parish boundary, with a drawing of a circular mound and ditch. It is roughly midway between the Iron Age Hillforts of Credenhill to the north and Eaton across the river to the south. The adjacent Camp Wood is marked on some later maps, e.g. 1970. However, the details or age of any features here seem to be unknown.

This was originally a Norman church, built around 1200AD. Between 1866 and 1870 it was completely rebuilt By F.R. Kempson, with an added north aisle. The only parts of the Norman church to survive are semi-circular tops to the west door and a west window and some masonry, including two buttresses on the south side. Today there is a short octagonal spire and there is a recurring trefoil theme. The two large yew trees in the church yard probably date back to the early days of the church. The chancel may have been rebuilt early in the 14th century.

There are two bells: one inscribed “Ave Maria gratia,” (probably 14th century) and the other “Ave Maria grasia plenas,” (probably 15th century). A boarded chest with iron bands and straps, iron extensions as legs and two carrying rings, dates to the 17th century, and a communion table with carved legs is late 16th century. The earliest monument is a painted and framed oak panel to Captain Rudhall Booth, 1685, inside on the north wall. Captain Booth was brought back to Breinton having died in Berwick-upon-Tweed in 1685. He was a descendent of Charles Booth, Bishop of Hereford, 1516-1535. His brother Charles was exiled with King James I and his estate eventually passed to Thomas Cooke of Kinnersley. Read more details in a New short Guide to St. Michael’s Church Nov 2018 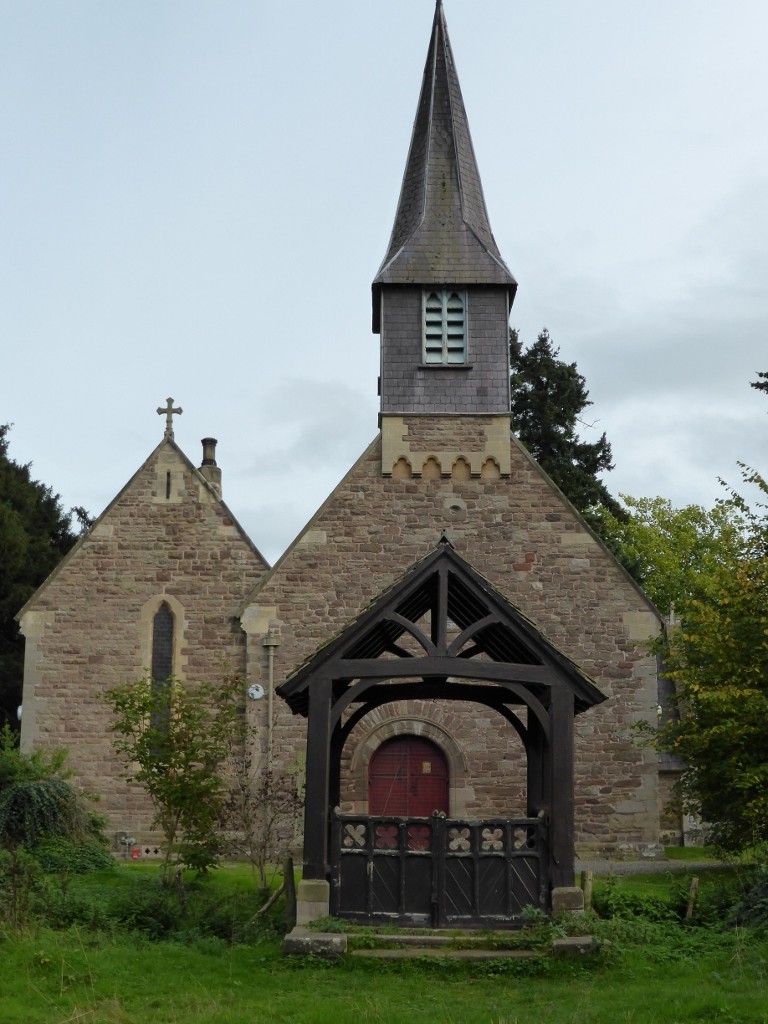 To the east of the vestry there are stones for Katherin, wife of Major John Booth 16[9]3, and to John Booth, 1690. The large tomb surrounded by rails near the south door of the Church commemorates Thomas Pritchard who died in 1811, and other members of his family. It was grade II listed in 1987[11]. The churchyard also includes some other interesting gravestones. Canon Charles Vincent Gorton (1854-1912) has a large cross with a line of music from Elgar’s Oratorio The Apostles. He and Elgar enjoyed the annual Three Choirs Festival of music from Herefordshire, Worcestershire and Gloucestershire together. Near the west door lies Charles Dodgson, a relative of another Dodgson, alias Lewis Carroll. Charles Dodgson lived at Breinton House and died in 1941. James Cranston, an architect who helped to restore the church in 1866 is buried near the church window dedicated to him. Some of his relatives, including his grandfather John Cranston who founded the plant nurseries on Kings Acre Road can also be found. 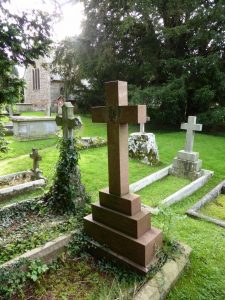 Dr. Henry Graves Bull (1818-1885) is buried in Breinton churchyard and is remembered for founding the British Mycological Society (for the scientific study of fungi). He was a founding member of the local Woolhope Field Naturalist’s Club, and as a doctor he pioneered the use of anaesthetic and worked to improve health and sanitation in Herefordshire. He also studied orchards and cider-making with his friend the Reverend Charles Bulmer of Credenhill, and Robert Hogg, which resulted in their book, the “Herefordshire Pomona”.

Breinton has strong links with Bulmer’s cider: with nurseries at Kings Acre, extensive orchards and homes of family members. The company Messrs. Bulmer was founded in 1887, by Henry Percival Bulmer of Credenhill, and with his brother Fred and his descendants built the company up to become a household name (later called H.P Bulmer & Co. Ltd.) Although Edward Charles Bulmer (1907-1944) was buried at Credenhill, he lived in Breinton and there is a memorial to his death (hit by a wingtip of a plane) in the Second World War.

The du Buisson family built the rectory (now Breinton Grange), and the school by the church, but lived at Breinton Court. Edmund du Buisson, M.A. Oxon (1821-1875) was Vicar of Breinton between 1854 and 1875, and the east window is a memorial to him and his wife Charlotte.

Herbert Gatliff (1897- 1977) was the son of a Rector of Breinton who became a top civil servant at the Treasury in London. He loved long-distance walking between youth hostels. He went to the Outer Hebrides with John Cadbury, chairman of the Youth Hostel Association, but there were no hostels, – so he helped to fund some. The Gatliff Hebridean Hostels Trust is still in operation today, and Herbert is buried in Breinton churchyard.

A list of births/marriages/deaths for Breinton is held by the Herefordshire Record Office.