A wide range of fungi are seen in Breinton because there are diverse habitats, including those within woods, meadows, old orchards and by footpaths that have been relatively undisturbed for many years. The waxcaps shown below are a feature of unimproved meadows that have been mowed but not ploughed or fertilised. 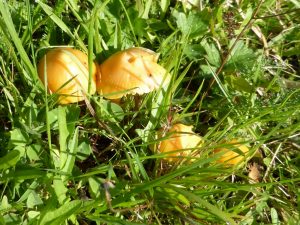 Dr Henry Graves Bull was a highly respected doctor in Hereford, but was also famous for his work on identifying fungi. He is buried in Breinton churchyard and was a member of the Woolhope Field Naturalist’s Club. At a field meeting in October 1868 “a foray among the funguses” was announced, and the word “foray” is now used widely by international mycologists (fungi experts). From this 19th century beginning the British Mycological Society was formed. A rare Milk Cap mushroom Lactarius controversus, was found by Rev. Edmund Du Buisson of Breinton Court in 1868, described in the Woolhope Club Transactions for that year, pp245-246.

The Herefordshire Fungus Survey Group visited St. Michael’s churchyard in December 2009 and were pleased to note some interesting species:

“We recorded 4 waxcaps, including Hygrocybe fornicata which I think of as uncommon in Kent, but which may be less so in the west, 5 clubs, including Ciavaha tenuipes possibly often misrecorded as C. acuta and Trichglossum hirsutum. The “true” Xerocomus chrysenteron was again recorded, this time under Tsuga sp. Otidea atulacea was found just outside the churchyard but in the litter from trees inside.”

“Firstly, we surveyed the lawns and shrubberies. The mossy lawns supported common waxcaps, Rickenelia fibula and swartzii, the club Clavulinopsis helvoia, Clitocybe rivulosa and Mycena flavoalba. They would repay another look. A suite of common saprophytes was present in the shrubberies. Here and elsewhere that morning we recorded Agaricus impudicus (=variegans). The “true’ Xerocomus chrysenteron was frequent under a cedar and it was interesting to see Peziza micropus on a fallen conifer. In all, we recorded 28 species in the grounds. It was not possible to look at all of the orchards, so we looked at those especially recommended by Miss Bulmer. A few patches of rabbit(?)-grazed turf supported common grassland fungi but, on the whole, few terrestrial species were recorded. Several large clumps of the striking Pholiota squarrosa were noted on apple wood. The seldom recorded Marasmius epiphylloides was found on moribund ivy leaves in the hedgerow. The most significant record was Sphaeropsis visci on fallen dying sprigs of mistletoe – curious that this fungus is so scarce in the County when the host is so common. Resupinatus tricotis was recorded in a small disturbed and derelict spinney.”

Read about some other unusual fungi in Breinton here, and a list of fungi seen in Breinton by Nichola Geeson (January 2014) 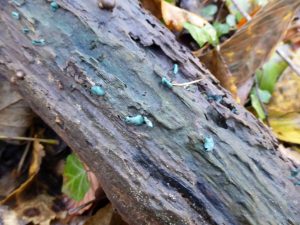