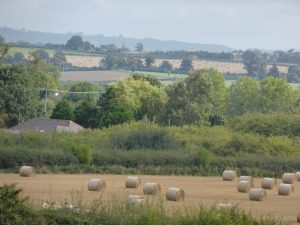 ” It is largely tranquil and rural in character but does include the larger settlements of Hereford and Leominster. There are small dispersed settlements of hamlets and villages, many of which contain older buildings with the local vernacular of black-andwhite timber-framed buildings. Restored cider barns with characteristic double doors and 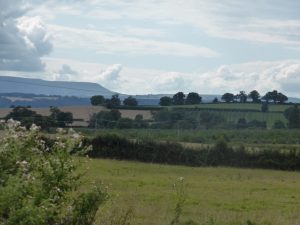 historic farmsteads are also common. The landscape is gently undulating with steep-sided cornstone hills in the central area dominated by ancient woodland of ash and field maple or oak and bracken. Woodland within the area is a significant landscape feature, typically on the hill tops and valley sides. Many of these woodlands are actively managed (commercially) to produce quality timber. The NCA is an important area for commercial agricultural supported by the fertile and high-grade agricultural soils; the farming is mixed arable and livestock.

Traditional orchards are still to be found, though suffering decline, with new orchards and dwarf varieties of trees also common. Historic parklands have many veteran trees that are important for invertebrates.” 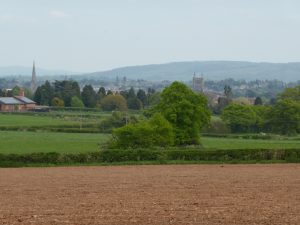 Away from the Kings Acre Road, the A438, the parish of Breinton is a collection of hamlets within an undulating landscape of orchards, nurseries, arable fields and grassland, with mature hedges and woodland. Some of the woodland appears to be very old, bounded by ancient banks and ditches. The southern boundary of the parish is the River Wye, which is set in a steep-sided wooded gorge. 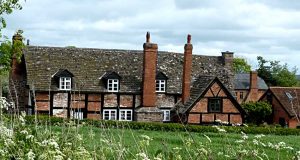 Under the administration of South Herefordshire (1992) this part of the Wye Valley was designated an Area of Great Landscape Value. A number of large houses, such a Wyecliff House, Breinton Court, Breinton House and Warham House, were built within Unregistered Parkland in this majestic river valley setting.

The River Wye flows through Breinton Gorge. Opposite Breinton Common on the south side of the river the Earth Heritage Trust have recently designated a new Local Geological Site. Here there are steep cliffs of red sandstones, known locally as Red Rocks. 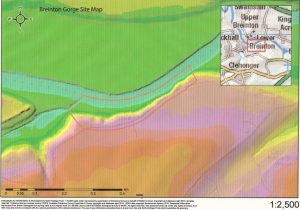 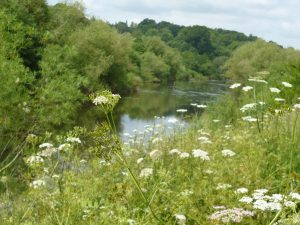 The River Wye has cut through Devonian Raglan mudstones to form a steep-side gorge by Breinton Springs (N. Geeson)

The geology of Herefordshire consists mostly of mudstones and sandstones of the Old Red Sandstone sequence, belonging to the Devonian Period (417-354 million years ago). The lower part of this sequence of rocks includes the slightly calcareous Raglan mudstones that underlie Breinton. Much of the base rock is overlain by glacial Till deposited during Quaternary ice ages, with some freeze-thaw (Head) or fluvio-glacial material near the River Wye. In recent times some alluvium has also been deposited close to the River Wye. 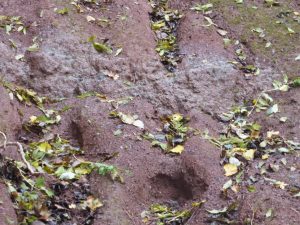 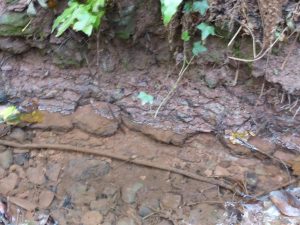 The southern limit of the parish of Breinton is the River Wye. However this river did not always flow along this route, and once occupied the wider W-E valley to the north of Breinton, where the Yazor Brook still flows. Around 18,000 years ago there was an advance of ice (in the Devensian glacial period) that stopped just to the west of Breinton. Ice blocked the former River Wye route and diverted the flow. There were frequent episodes of freezing and melting, so that ice and water were continually re-diverted and moving sediments on a grand scale.

Temporary lakes were formed according to the development of ice and sediment barriers. The power of ice and meltwater was enough for the River Wye to cut down through the Raglan mudstone rocks to create the steep-sided Breinton gorge seen today.

For more details see a report on archaeological and geological monitoring across the River Wye at Tuck Mill: http://archaeologydataservice.ac.uk/catalogue/adsdata/arch-784-1/dissemination/pdf/archenfi2-31695_1.pdf 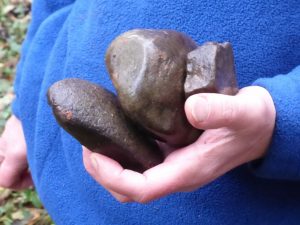 These pebbles in a stream are not local rock. They were transported to Breinton from Wales by ice in the last Ice Age (N. Geeson)

Water at the edge of the ice sheet left deposits of gravels where the flow was most powerful, and finer deposits elsewhere. Small gravel pits are shown on older maps (1887, 1:2500) near Breinton Common, Wye Cliff and Breinton Court. The 1839 tithe map also shows the gravel pit at the east end of Breinton Common. A Brick Kiln field is shown near Little Breinton, and Brick Kiln Meadow by the Wye at Warham. This suggests that as meltwaters reached the east end of Breinton Gorge, first gravels were laid down, and as the valley widened and the velocity slowed, fine clay deposits suitable for making bricks were deposited. For more about geological history see map: British Geological Survey 1:50,000 series, Hereford Solid and Drift geology, 1989. 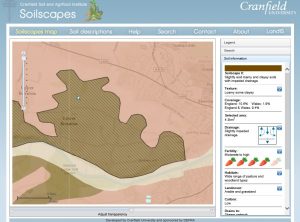 Interactive soil maps of Breinton can be viewed at http://www.landis.org.uk/soilscapes/ Much of Breinton, especially the higher land, is characterised by slightly acid loamy and clayey soils with moderate to high fertility (coloured darker brown on the map). Having slightly impeded drainage, these soils are best suited to orchards, autumn-sown crops and grassland. The pinky-brown coloured areas are freely draining slightly acidic loamy soils, mainly on the lower slopes. These soils have supported famous horticultural nurseries over the last 200 years (Cranston’s, King’s Acre, and Wyevale today). Along the River Wye there are freely-draining floodplain soils (light brown on the map, also with moderate to high fertility.