Breinton lies two miles to the west of Hereford, and is really a collection of hamlets: Warham, Upper Breinton, Lower Breinton, Breinton Common, Veldifer, and part of Swainshill. It has a church (St. Michael’s), a Village Hall and a seasonal farm shop at Breinton Manor Fruit Farm. The name Breinton appears to be a modernised form of the word Bruntone, meaning a village near a flowing stream.

There are not many English parishes bordering a built-up city that are so rural and have changed so little in the last 1000 years[1]. In Breinton, one reason for that is the high quality of the soils for agriculture and horticulture. Therefore relatively few new buildings have been built on the valuable deep red loams since those shown on the 1839 tithe map[2]. Another reason that Breinton remains rural is the exceptional beauty of the landscape, with unsurpassed vistas across hills, orchards, woods, and the valley of the River Wye, – and an interest to conserve the heritage. The landscape was formed both by glacial erosion, terminal moraines and river erosion – hence the undulating features. The parish boundary is irregular, but in general it encloses land between the River Wye and the A438 that runs from Hereford west towards Brecon. Half the population of Breinton (726 adults in the 2011 Census) live on or close to Kings Acre Road (A438). 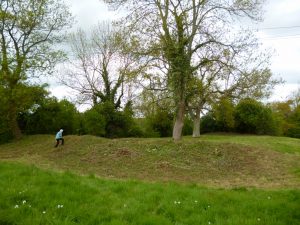 The mound with moat by St Michael’s church (A. Geeson)

The long history of Breinton remains visible in the landscape. A mound with a moat[3] lies close to the Church at the National Trust property of Breinton Springs (SO 4726 3948). A moated building on this site was used by the Dean and Chapter of Hereford Cathedral around 1150AD, but may have had an earlier origin. Nearby, the undulating ground in the orchard by the Church was thought to be a deserted medieval village[4], but may just have been an earlier Vicarage. The Domesday Book[5] mentions a settlement with 8 villagers at Warham but does not appear to mention Breinton. Above Breinton Springs there is a deep gully down to the river that may have been used by drovers to cross their livestock over a ford. The bridleway across the north of the Parish used to be an old drovers’ way, with at least one pond along its route where livestock were watered. The bridleway also passes the Millennium Wood (planted by the Woodland Trust in 2000), which is now named ‘Drovers Wood’. Other archaeological features that have been identified include trackways, ridge and furrow, and evidence of old irrigation leats on the meadows that flood, close to the river Wye.

St. Michael’s church[6] originated around 1200 AD, but was substantially rebuilt between 1866 and 1870 by F.R. Kempson. A few Norman parts remain, including the west doorway. Churchyard memorials include those of Dr. Henry Graves Bull (major contributor to an encyclopedia of local apples and pears, the “Herefordshire Pomona”[7] in 1884), Canon Charles Vincent Gorton (1854-1912, friend of Edward Elgar), and Charles Dodgson (relative of Lewis Carroll, died 1941). More evidence of former ways of life are shown in the works of the artist Brian Hatton (1887-1916)[8]. The locations of many of his rural scenes of Breinton that include old farm buildings and views of the countryside are still easily recognisible today[9].

The fertile soils of Breinton have long been a special centre for orchards and also horticulture, at least since 1876 when some of the best roses in the country were grown at Kings Acre Nurseries by Messrs. Cranston and Mayos. In the early 1800s Mr Thomas Andrew Knight[10] carried out selective breeding experiments to improve apple growing. Cranston’s Nursery and Seed Co. Ltd. introduced new apples such as the King’s Acre Pippin[11], and H.P. Bulmer and Co. Ltd.[12] developed varieties of cider apple, and new techniques for orchard design and management. The Wyevale Nurseries[13] (now mostly just outside the Parish) were established in 1932 by Harry Williamson, who pioneered the innovation of container-grown plants. The nurseries and fields of Breinton still yield a wide range of high quality plants and trees; dessert and cider apples and pears; and cereals, vegetables and other crops. 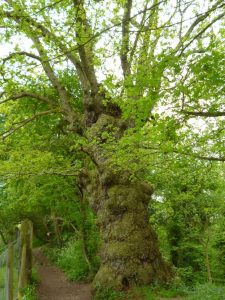 The natural history of Breinton also reflects an ancient landscape. Field boundary hedges show a rich flora, and there are many veteran trees, particularly oak and ash; plus ancient yews close to St. Michael’s church. Some areas have been woodland at least since the earliest maps were drawn, and some fields have an unusual variety of arable weeds, including the uncommon Shepherd’s Needle. The orchards are home to many mammals, birds and insects, with evidence also of the rare Noble Chafer beetle.

There are a number of footpaths and cycle routes through Breinton, including the Wye Valley Walk that follows the beautiful River Wye, which is in itself a Site of Specific Scientific Interest. Along with the quiet lanes, it is easy to see why Breinton is so popular with walkers, joggers and cyclists.